For those of you who are new to sports betting, the “Closing Line” is the line/odds of a game when the market for a game closes (i.e. just prior to kickoff/first pitch/tip off, etc.). Closing Line Value (CLV) is simply a comparison between 1) the line/odds that your bet was placed at and 2) the Closing Line.

We’ve talked in length about the importance of line shopping and getting the best number. The theory behind CLV is that if you’re getting a line better than what is offered at the close of the market, that’s generally a good thing.

Simple example: you bet the Yankees at -125 and they closed at -150. You got positive CLV. Congrats!

Unfortunately, there is no standard approach to measuring CLV.

Some people prefer to review their CLV absent the book’s vig. Do make this adjustment, we simply compare our line with the implied no-vig line.

CLV for Point Spread and Totals

To measure CLV for points spreads or totals using the Win Probability Approach or the Expected Value Approach, you need to estimate the push probabilities of the numbers that were crossed (i.e. if you bet -2.5/-110 and the market closed at -3.5/-110, you crossed the 3). You can then compare your bet with the implied “fair” moneyline of your bet based on the closing line. Referencing our NCAAB half point price of 9 cents on the 3, we estimate -2.5/-128 to be the equivalent of -3.5/-110. You can then calculate your CLV just as you had before.

The primary purpose of CLV is an alternative measure of performance. The theory is that if you’re getting enough CLV to cover the vig, you should be a winner in the long term. Many “pros” claim that its best to benchmark performance based on CLV rather than actual outcomes. This assertion relies heavily on the efficient market hypothesis.

Without giving you a financial theory history lesson, very simply the efficient market hypothesis ("EMH") states that the price of an asset reflects all known information and that consistent alpha (excess returns) generation is impossible. Sports betting translation: the only way to bet profitably is to generate CLV and it’s impossible to generate +EV if you only bet right before the game starts. If you bet the Closing Line you should expect to lose an amount equal to the vig in the long-term.

Quite simply – we disagree.

Various forms of EMH may apply to liquid financial markets, but I’m going to make the argument that while CLV is useful, the Closing Line is far from efficient.

Is the Market Efficient?

Market efficiency is often characterized as having the following attributes:

2.     Important information is freely available to all participants

In an efficient market, the only thing that moves the price of an asset is new information. If this were true, we should be able to identify long periods of static lines, as no new information has been revealed.

Let’s check out an example of how reactive the markets are to new information:

On January 11, 2020 the OKC Thunder hosted the LA Lakers. Around 1:30pm ET, news broke that LeBron would miss the game. Naturally, that injury announcement had a large impact on the odds for both teams. A time series plot of the Thunder’s breakeven win probability is shown below. 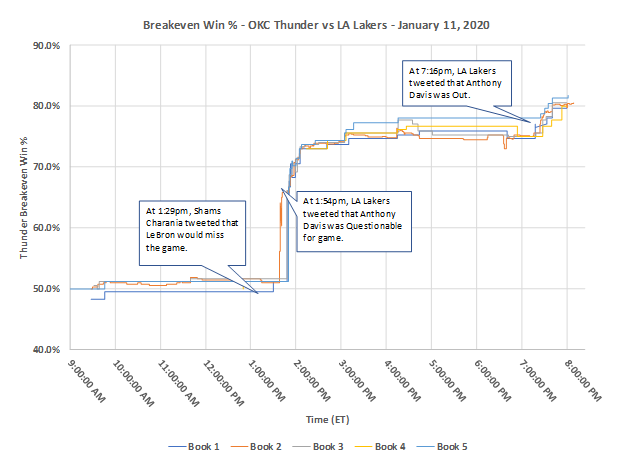 The lines almost immediate improved the Thunder’s breakeven win % from ~50% to ~65%. Without giving a chance for the lines to reach a new equilibrium, another bombshell was dropped at 1:54pm ET: Anthony Davis was questionable. The lines continued to move in the Thunder’s direction for the next hour or so before seemingly reaching an equilibrium a little after 3pm ET.

When it was finally announced that AD was downgraded to Out around 45 minutes before tip, the line began to further trend toward OKC.

So how should we judge these movements? Did the market immediately factor in new information?

Although the market reacted fairly well, there was still some opportunity to get a bet in before the market reached a new equilibrium, particularly with regard to the AD news. The market may not have fully reacted immediately, but this isn’t enough evidence to disprove the EMH.

2.      Important Information is Freely Available to All Participants

Does everyone have access to the same information? Certainly not everyone would agree with me, but I generally believe that most sports information is freely available these days. The barrier to information is lower than it’s ever been. People use information in different ways to give them certain edges, but information asymmetry by itself isn't a reason to disprove EMH.

I think we can all agree that the drunk guy parlaying the Gatorade color and coin flip at the Super Bowl might not be rational or profit maximizing.

And judging by a few Reddit comments there are plenty of sports bettors who aren’t strictly profit maximizers:

“I tend to gamble more when I’m bored.”

“I was drunk and wanted to bet so I threw down 5 units on an Australian women's basketball game on a blind tip from the Nitrogen chat room.”

The vast majority of sports bettors aren’t profit maximizers, but utility maximizers. Sports betting offers a form of exhilaration and entertainment that can’t be found in other places. A lot of that excitement manifests itself in poor-EV-yet-thrilling wagers (such as parlays, teasers and futures) that sportsbooks happily offer you.

Just how much are non-profit maximizing behaviors costing sports bettors? To answer that, let’s take a peak at the Nevada’s annual sports betting report. In 2019, sportsbooks in Nevada took $5.3 billion in wagers and held $329 million, representing a hold of 6.2%. We've discussed elsewhere how standard -110 odds gave sportsbooks a hold of 4.5%, which we could chisel away at pretty easily with some basic line shopping. Thus, if market participants were truly profit maximizers, we’d expect a hold significantly less than 6.2%.

OK – so finally we have some evidence that the EMH might not hold. Let’s test it with some data.

If we show that the weakest form of the EMH can be disproved, we can largely disregard the EMH.

Straight from Morningstar: “The weak form of EMH assumes that current stock prices fully reflect all currently available security market information. It contends that past price and volume data have no relationship with the future direction of security prices. It concludes that excess returns cannot be achieved using technical analysis.”

Let’s go ahead and use MLB Moneyline data from the 2015-2018 seasons to see if we can predict the direction of the closing line, and therefore generate theoretical value (CLV) by beating the closing line.

We gathered the Closing Line as well as the line 2-hours prior to first pitch (T-2) to see if we can recognize any patterns. We can then test the statistical significance of those patterns to give us a sense of whether they have any merit.

The traditional school of thought is that if you’re betting favorites, it’s best to bet them early. If a dog, wait until close to game time. Does this theory hold? If it does, we could use it to disprove Weak Form EMH.

The first thing we can do is review the parity of the teams playing at two different points in time. If we're expecting a close game two hours prior to first pitch, are we expecting the same thing right before the game starts?

Yes, the curves look similar. But if we focus on the difference between the two, we can identify a more significant pattern. 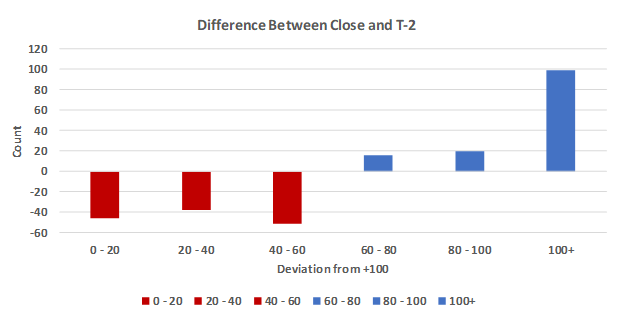 What the above shows is that there are more “close” games at T-2 and more "big favorites" at Close. Huh? How can that be?

Answer: lines move toward the favorite from T-2 to Close.

Let’s dive a little further and focus on games that have a significant favorite.

Visually, we can look at the distributions of movement below. 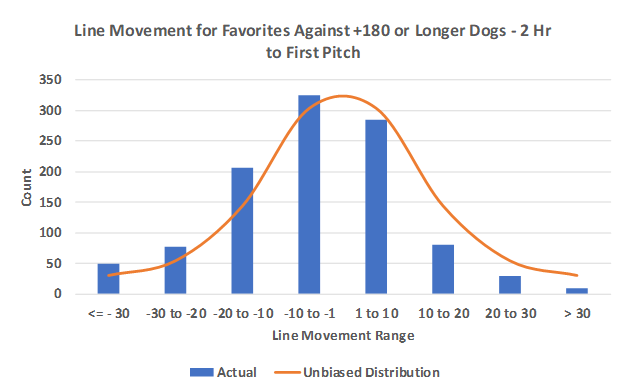 If we remove the 147 games that had no line movement, we have 1,061 games that experienced some type of line movement. Of those 1,061 games, 657 (61.9%) of them had movement toward the favorite. Can we simply bet favorites two-hours prior to first pitch and capture positive CLV in the long-term?

We would assume that if markets were truly efficient, there would be a 50/50 likelihood of line movement in either direction. To determine the likelihood of 657 of games moving toward the favorite completely by chance, we can use a binomial test calculator. What we can tell is that if we had a truly efficient market, the chances of having 657 of 1,061 games move toward the favorite would be basically zero (approximately 1 in 429 trillion).

Thus, we can no longer assume Weak Form EMH, which states that past prices have no relationship with future price movements since we can capture positive CLV simply by betting favorites 2 hours prior to first pitch (we're not suggesting you do this).

If this isn’t enough evidence to disregard the EMH, I pose you this: are the MLB markets systemically mispricing favorites two hours prior to first pitch, only to correct this mispricing from T-2 to Close?

The evidence above provided a theoretically argument why the EMH can be largely disregarded and therefore CLV should not be the target that bettors are optimizing for.

A more practical reason why CLV should not be the target: because CLV is fairly simple to measure, it is the primary way that sportsbooks designate who is sharp and who is square. With so many sportsbooks practicing the strategy of limiting or banning sharp bettors, it’s probably not ideal to optimize for a strategy that 1) rests heavily on the assumption of an efficient market and 2) firmly puts you on the radar of sportsbooks.