Push Probabilities and the Value of a Half Point

At its core, sports betting is about estimating the probability of an event occurring and comparing your estimation with the implied probability of the payout that is offered from a sportsbook. For example, if you estimate the probability of Colorado men’s basketball team covering the spread against USC to be 55.0%, it’s probably worth a bet if you can get -110 odds on Oregon (52.4% breakeven probability).

However, what is often oversimplified is the fact that your estimate is actually a conditional probability. Your estimate that Colorado has a 55.0% chance of covering is conditional on the fact that 1) the teams that playing are Colorado and USC, and 2) Colorado is a 9-point favorite and 3) whatever else is an input into your model. If Oregon were a 7-point underdog instead, your probability would be different. This is what makes totals and spreads incrementally harder to model that money lines. Betting a money line, you only need to consider the odds (set by a sportsbook) and the probability of a team winning. Betting the spread, however, requires you to account for the odds and the probability of a team covering the spread, both of which (the odds and the spread) are set by the sportsbook.

Using data from the past two seasons of NCAAB,[1] we can estimate the frequency of a game ending in a 9-point margin to be around 4.8% (513/10,810). But Colorado could be on the winning or losing side of that game. With this data, we should be able to conclude that the likelihood of Colorado winning by 9 points is approximately 2.4%, right? Ehhh not quite.

Alright, so let’s look at the frequency of winning by 9, conditional on being the favorite. Of the 10,810 games sampled over the last two seasons, 238 games were a pick-em, leaving 10,572 instances where there was a favorite and an underdog. Of those games, 366 ended with the favorite winning by precisely 9 points. Therefore, conditional on being a favorite, the frequency of winning by 9 points has been 3.5% (366/10,572) over the past two seasons.

Unfortunately, this is not enough to say that a team that is favored by 9 points has a 3.5% probability of pushing. Not all favorites are the same, as some are small favorites and some are large favorites. What we’d like to do is isolate the games that feature a 9-point favorite, or there about.

Over the last five seasons, there have been 1,247 games featuring a favorite between 8 and 10 points. (Note: we used 8-10 rather than 9 for the sake of increasing our sample size, and therefore our confidence in these insights.) In those 1,247 games, the favorite won by exactly 9 points on 55 occasions, or 4.4% of the time. While we don’t know with certainty that this represents the true probability of pushing a bet as a 9-point favorite (as there are many other factors in a game), we are much more comfortable with this figure than any of the figures calculated above.

Value of a Half Point

Let’s assume that you want to bet Colorado v USC tonight and most books are dealing Colorado -9/-110. However, some books are moving to -8.5. At what odds for -8.5 would you be indifferent between betting laying -8.5 and betting -9/-110?

"Cool math, guys. But how does does this help me?" 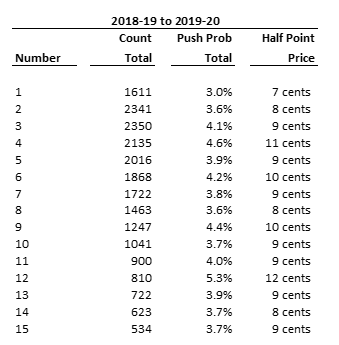 Although we increased our sample size by including numbers with close proximity to our target number (i.e. using 8-10 spreads for a target of 9), the above table is noisy, nonetheless. While certain sports such as football have significant key numbers, the granularity of scoring in college basketball doesn't suggest that there would be a significant difference between the half point price of a 12 and 14. Therefore, when interpreting these tables, you might consider smoothing out the results similar to as shown below. 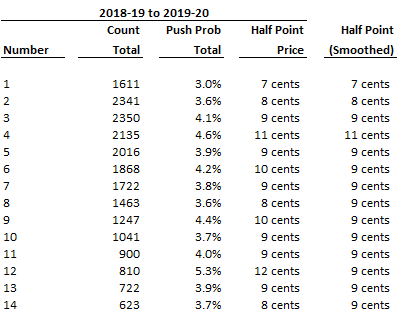